What are the Periodic Inspection and Replacement Items of the Cement bin in the Asphalt Mixing Plant?

As an Asphalt Mixing Plant Supplier, share with you. As one of the important auxiliary equipment of asphalt mixing station, the cement silo is mainly used for storing cement aggregates. Large-scale equipment like this should pay more attention to its safety. This means that the cement silos in the asphalt mixing plant must be regularly checked and maintained. 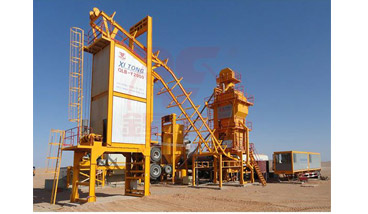 The cement silo of Asphalt Mixing Plant is not only safer for regular inspection, but also needs to be cleaned regularly, except that the dust collector does not need to be replaced, as long as it is kept clean. Once many other parts are damaged, they should be replaced in time to avoid adverse effects on them.

For example, it is necessary to regularly check whether the ash cleaning mechanism of the cement warehouse of the asphalt mixing station, the induced draft fan is operating normally, and whether each sealing part of the cement warehouse is normal, and develop the habit of regular replacement. When cleaning the cement bin, detergents are usually used, but after cleaning, pay attention that no moisture can be left in the bin, otherwise the bin body will easily rust.

During the inspection process, the various lines of the cement warehouse of the asphalt mixing station cannot be ignored to keep it open; before and after the bulk cement truck injects ash into the tank, the vibration is not smooth when the vibration is turned on for 2-3 minutes. If it is blocked, it should be cleaned in time.

If you encounter an inaccurate display of the electronic control system when using the asphalt mixing station, the cause may be that the weighing system is affected by external forces, or it may be the weighing zero or weighing caused by the sensor drift error. Caused by changes in the amount of space.

In the above situation, what the user needs to do first is to eliminate the external force of the electric control system of the asphalt mixing station, and then re-calibrate the zero position of the weighing. If the asphalt mixing station is weighed by multiple sensors, the situation of partial load needs to be considered. If the state of partial load is found, it is likely that one of the sensors is damaged or the cable is loose and damaged. At this time, the user needs Things to do Replace the sensors and check the cables.

Our company also has LB Mobile Asphalt Plant on sale, welcome to consult.

Previous How to Maintain and Maintain Cement Silos in Asphalt Mixing Plant?

Next We can Repair Asphalt Mixing Plant.